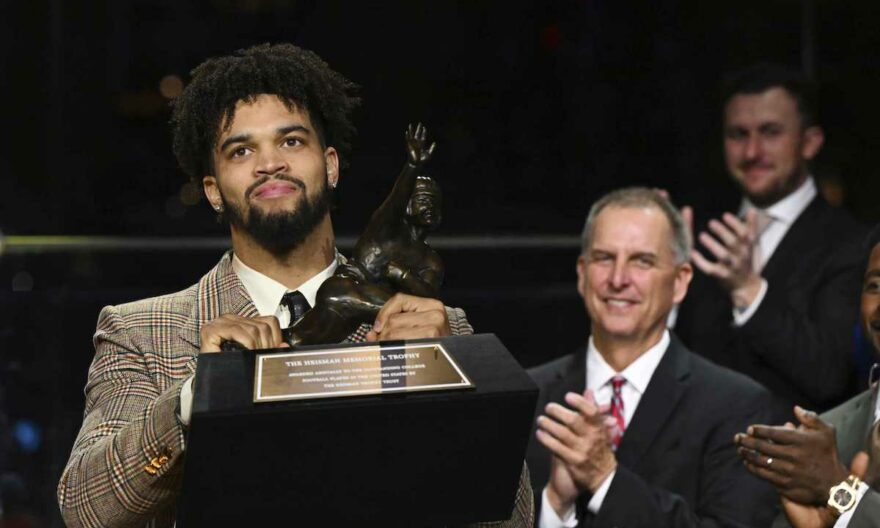 In celebration of football star Caleb Williams winning the 2022 Heisman Trophy, Hall of Goats have released exclusive NFT player avatars. The company released 10,000 limited-edition Caleb Williams NFT avatars that will be available from December 13 to 15. Here’s what you need to know about the recently released NFT avatars.

For Williams’ phenomenal football season, Hall of Goats is releasing its first NFT drop: Caleb Williams’ NFT Avatar. From December 13 to December 15, 2022, fans will be able to purchase an NFT avatar exclusively on hallofgoats.com. Further, the drop will include 10,000 NFTs featuring #13 USC quarterback Williams, each piece priced at $30.00 USD. Furthermore, the first day of the sale will be for Founder Pass holders, while the remaining days are for the public.

Moreover, the owners of the Caleb Williams NFT avatars will have access to a variety of fan benefits. This consists of access to HoG’s upcoming video game, access to AMAs with Williams, exclusive merchandise drops and more. As another key point, a portion of the proceeds will go to Caleb Cares, Williams’ foundation dedicated to eliminating bullying.

As a refreshing and innovative form of utility, HoG is granting holders the ability to use their NFT avatar in their upcoming videogame. The beta is set to release in 2024 and will include unique features for players to enjoy. The HoG free-to-play game, in detail, will enable players to collect the best college football stars, level up their players, and compete in an arcade-style football game. The game will also contain a marketplace where users can buy, sell and trade their NFT avatars. Additionally, the HoG game will bring in other notable college football stars for players to use in-game. Some of these athletes are Braelon Allen (Wisconsin), Deuce Vaughn (Kansas State), Matt Leinart (USC) amongst many others.

In addition, the fast-paced game that’s currently under development, will be overseen by HoG’s SVP of Gaming, Brian Graham. He’s a veteran in the gaming industry with over 20 years of experience at Electronic Arts. Further, Graham has worked on the worlds’ most recognizable sports games, including Madden NFT and NBA Live.

“The developmental stage of game building is like a ‘blank sheet of paper.’ You get a chance to find the ‘soul’ of your experience and what will make it unique and worthy of players’ attention and time,” says Brian Graham. “Joining HALL of GOATS takes me back to an older era of sports games from my arcade days, where we have creative liberty and can build on something that focuses on just being fun.”

About Hall of Goats

Hall of Goats is a gaming company founded by 2004 Heisman Trophy winner Matt Leinart, former USC player Greig Carlson, and recent Heisman Trophy winner Caleb Williams. The company aims to assist athletes in capitalizing on their NIL (Name, Image, Likeness) rights. It empowers athletes to create their own avatars and take control of their brand. HoG is enabling fans to interact with their favourite players while giving them exclusive access to unique benefits and experiences.

Did you miss our previous article…
https://nft.magnewsblog.com/enhance-your-product-and-research-with-dappradar-api/