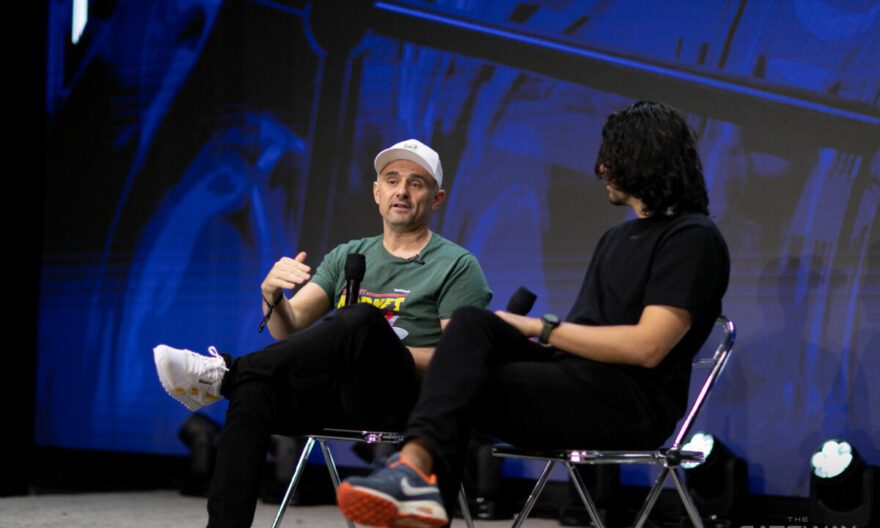 Everyone wants to know what Gary Vee thinks. When the hugely successful social media and NFT entrepreneur attended nft now & Mana Common’s The Gateway: A Web3 Metropolis opening night party on Tuesday, he left a trail of turned heads and star-struck onlookers wherever he went. Likewise, as he exited the Dupont Building in downtown Miami yesterday after giving a panel talk on the state and future of the Web3 industry, he went out like the Michael Jackson of Web3 — an explosive round of applause followed by a swift exit to escape the quickly-swarming cameras, well-wishers, and networking hopefuls.

Before he did, however, Vee (formally Vaynerchuk) delivered a rousing talk that Web3 enthusiasts simply needed to hear. His tone was serious, effecting a sincere concern for the plight of Web3 and the people building tomorrow’s blockchain features within.

Building out of the crypto winter

“We’re in an economic correction,” Vaynerchuck bluntly said of the state of crypto and NFTs in general. “We get out of it the same way the internet got out of it. From 2001 to 2004, a lot of websites like Friendster became the previews to the Reddits and the Instagrams [of today]. In the next 36 months, people are going to build meaningful things instead of fast things for fast cash.”

Vee also emboldened those who endeavor to be those meaningful builders to think sustainably about any enterprise or partner they engage with in Web3. Be hard on your beliefs, plans, and business strategies, he explained, and be just as hard on others’. “Most of 2021 [and] half of 2022, I was in tons of meetings,” Vee recalled. “19 out of every 20 meetings, the person on the other side of the Zoom was unable to answer the second chess move of the questions: ‘How are you going to create demand when the market softens?’ Nobody was capable of giving me a good answer.”

Reminding people that success is slow, Vee underscored that the winding road to success in Web3 is not for the faint of heart. Drawing parallels to the tumultuous earlier days of Web2, he explained that people may leave the Web3 space during a downturn not because they no longer believe in it, but because they simply may not be willing to “live humbly” through the rough patches.

“I’ve always been more proud of that version of me than all of the sizzle,” Vee expressed. “I’m proud that I’m an actual businessman. Real shit takes time to build. It’s supposed to be hard if you’re trying to live a one-percent of a one-percent life. Everyone talks about being about ‘that life’ until that life punches you in the fucking mouth.”

When asked how he remains humble given the success of VeeFriends and his other business ventures, Vee didn’t mince words when addressing the attitude he strikes regarding his achievements.

“Business success doesn’t mean shit,” Vee said candidly. “If I die tomorrow, I’ll trend on Twitter for 24 hours and then the next day everybody will live out their life. I just don’t think being good at making money or being a good entrepreneur enables one to think they’re better than other people. I don’t have my validation in my business success. I have much more validation in what people that actually know me feel about me.”

Regardless, Vee is laser-focused on fostering the success of his dream project — seeing the VeeFriends IP branch out as widely as possible. Nothing is off the table: movies, amusement parks, and cartoons are just some of the iterations Vee wants his NFT empire to expand into. Comparing Marvel Comics’ trajectory, Vee observed that the cultural giant didn’t start out with mammoth IP power. The key, Vee said, is to take great care to mature the IP, and that takes years.

“There is no question in my personal mind that this [is the business that] puts me in a position of achieving my life business goal of buying the New York Jets,” Vee said pointedly. “I’m genuinely not worried about the [crypto] winter. I think when all the dust settles in 22 years, you’re going to forget about a lot of names that we fuck with today and I’m going to be fucking dominating. But if I don’t, I’m going to be pumped for World of Women or Bored Apes. I’m going to get mine, nobody is going to stop me from getting mine — that’s why I cheer for everybody else to get theirs.”

The future of VeeFriends

Speaking to the future of VeeFriends as 2023 approaches our horizon, Vee explained that VeeCon 2023 is of prime importance for the brand while also hinting at the company’s focus on building technological products for their community and broader Web3 ecosystem. The team is also working on “deflationary dynamics” to better reward members of the community rather than releasing new collections to entice new people to buy into the VeeFriends world.

In 25 years, Vee predicted, there will be just as many meaningful intellectual properties that had the origins in the current Web3 era, and he is confident that VeeFriends will be among them. That long time frame speaks to the need for emerging NFT projects to consistently execute and deliver to justify even their current floor price. This is in stark contrast to historical projects like CryptoPunks, of which Vee owns 61 NFTs, and whose significance as pivotal assets in NFT history is secure.

Rounding off the panel discussion with a note on legacy and what it means to him, Vee diverged from business talk and emphasized a healthy balance of the virtues of relentlessly pursuing one’s goals and being compassionate while doing so.

“[I’d like my legacy to be] that I gave more than I took,” Vee said. “And that I gave a real fucking swing at it to teach people that you can be kind while being ambitious. You can be incredibly selfless while being ok with being selfish for you and your family. I’m going to give that a real run for forty years. And I’d like to think that that’s what my legacy will be.”

Vee’s success to date in the business world, in addition to cultural impact, leaves little room for material criticism at this early stage. As Vee descended the marble stairs of the Dupont Building, departing into the street where endless crowds of admirers awaited, he walked with intention, not looking back at the crowd once. If his exit from the scene had a voice, it would have said simply: “I have things to do.” The rest of Web3 may do well to take note of that disposition.

The post Gary Vee on Surviving the Crypto Winter and the State of Web3 appeared first on nft now.