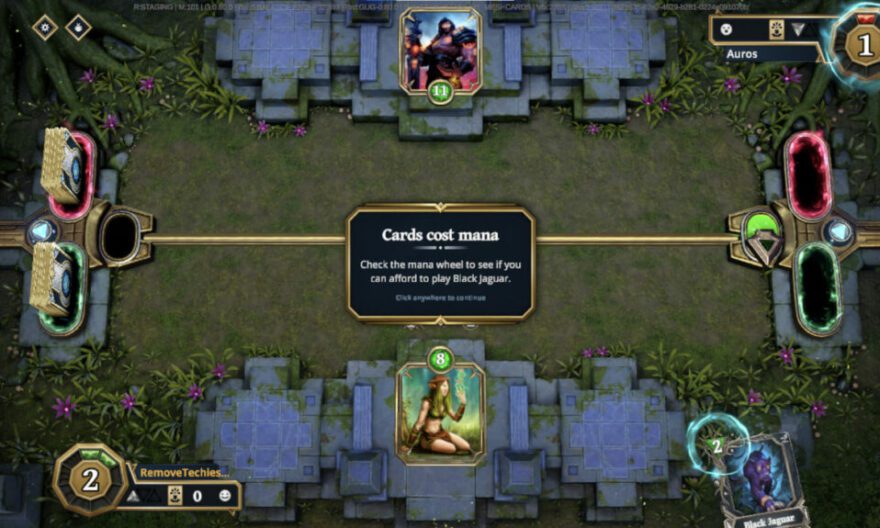 Gods Unchained released a patch with a few updates to their UI (user interface) in preparation for their first alpha with mobile devices. With the mobile alpha test expected in Q1 2023, Gods Unchained is ready to reach out to a broader playerbase.

Though popular and well-known in the web3 gaming world, Gods Unchained still has a relatively small playerbase. They see about 5K active players per week according to DappRadar. And while they have had a playable desktop client for over four years now, Gods Unchained has never moved to mobile — until now!

Gods Unchained is ready to expand and try to attract a larger audience with an upcoming mobile release. But first, they needed to work on the client code to make to make it compatible across devices, and also make some adjustments to the user interface.

First off, they decided to move the mana wheel to the left side of the screen, and the player’s hand to the right. This was to allow them to adjust the interface to fit on a mobile screen. But after some player feedback, they decided to also add a toggle, allowing players to choose whether to display their hand in the center or on the right. The game defaults to center for desktop clients, and right for mobile players.

Other updates include fixes for click issues in certain parts of the screen, and other bugfixes. Mobile gaming is growing bigger every day, and it’s great to see more web3 games moving into that market.

The Gods Unchained plans for the desktop and mobile experiences to be basically the same. And for any future updates to encompass all the clients. The closed alpha for the mobile client should open sometime in the next month or two.

Gods Unchained minted Meteorite level Star Store cards in December, and now they just opened up Forging of Welcome cards all the way up to Diamond shine! Not only can players buy and sell these cards on the market, but they can also earn more GODS tokens when playing matches with shiny cards.

This should be a welcome addition to the play and earn economy in Gods Unchained. This provides a reason for purchasing multiple copies of Welcome cards from the Star Store, and also creates additional demand for GODS tokens as players need them to use the Forge.

What is Gods Unchained?

Gods Unchained is a free-to-play, collectible card game. Built on the Ethereum blockchain, Gods Unchained uses the Immutable X layer-2 solution for gas-free trading. Players retain full ownership over their cards. Players can earn digital ‘Core’ cards by playing the game. When a player has two identical Core cards, they can mint these into one blockchain-based card. That card is then tradeable on the markets.

With several expansions its belt, Gods Unchained has a wide variety of cards for different playstyles. Gods Unchained currently sells packs for Mortal Judgment. Players can buy and open packs from the official site. Secondary sales are available on IMX and Token Trove.

Did you miss our previous article…
https://nft.magnewsblog.com/a-kid-called-beast-nft-everything-you-need-to-know/