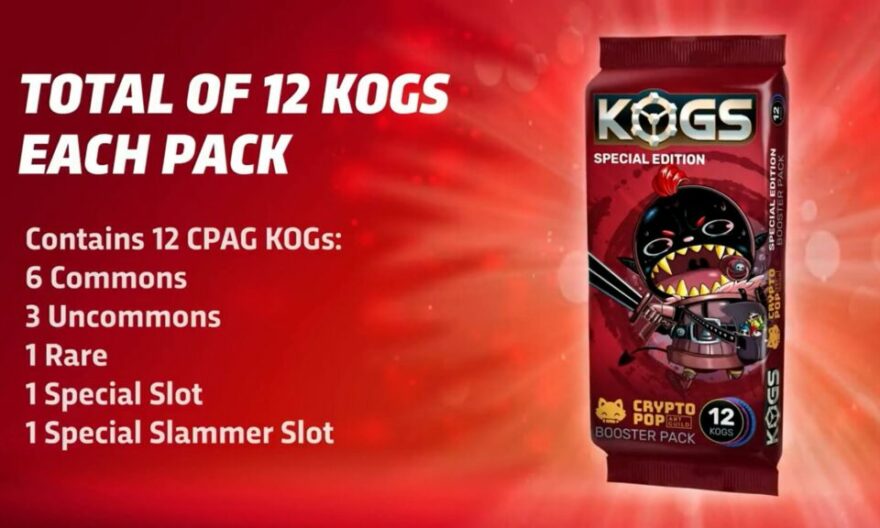 On September 13, 2022, KOGs, a product of RFOX GAMES, began its Special Edition Booster packs and boxes sale in collaboration with the now much-accredited Cryptopop Art Guild (CPAG). The sale will run through at least 90 days and will help enthusiasts in piecing their existing gaming NFT sets together.

Time to get those sets completed!

Get the #KOGs you’re missing with the KOGs x @Cryptopopart Booster Packs and Box! Available for at least 90 days, starting today!

Check out the details on today’s blog!https://t.co/JC4C7LFfws

KOGs standing for Key to Other Games, are NFTs crafted and dispersed by the RFOX GAMES, a division of RFOX. It deals with an interactive metaverse channelizing new takes on the retail and gaming industry.

KOGs work as keys for access to skins, tournaments, virtual spaces, and much more. These are inherently collectible and can be effortlessly transferred. They almost single-handedly power a flourishing ecosystem of interactive video games, including KOGs own blockchain title – KOGs: SLAM! It is now available in Open beta for mobile devices and can be downloaded from Google Play and the App Store.

The Cryptopop Art Guild (CPAG) is a conglomeration of deserving but underprivileged artists based in the Philippines. Still, courtesy of the world wide web, they’ve been virtually thriving on a global scale. Some of the most prestigious names, such as the celebrated YGG country manager, Luis Buenaventura popularly known by his alias ‘cryptopop’, whose work has been featured and sold at Christie’s, adorn the guild. He leads CPAG supported by foresighted investors such as YGG founder Gabby Dizon.

The second item is the cream of the crop with 30 Collector’s Booster Pack and has the bonus of 3 Toppers, all totaling up to 180 USD per box. The Bonus Topper is especially eyed by collectors as one may come by a Rare or Ultra Rare KOG, Rarity foils, Rarity Slammers, or any Rarity Gold Slammer.

You can get your special edition NFTs here.

KOGs is a product of RFOX Games, a venture of RFOX, a metaverse company. RFOX is powered by its digital asset, $RFOX, available on Ethereum, Binance Smart Chain, and WAX with more upcoming chain integrations.

RFOX Games is manifesting a revolutionary metaverse of interoperable video games based on an interactive tournament system that utilizes bleeding-edge upcoming technologies. They operate primarily on the NFT ecosystem, where users can easily gain access to skins, weapons, upgrades early access, etc. The game token for RFOX Games, $RFOX, will be issued an ERC20 token to use a token bridge and as an initiation at WAX, where all of the NFT gaming action is happening.