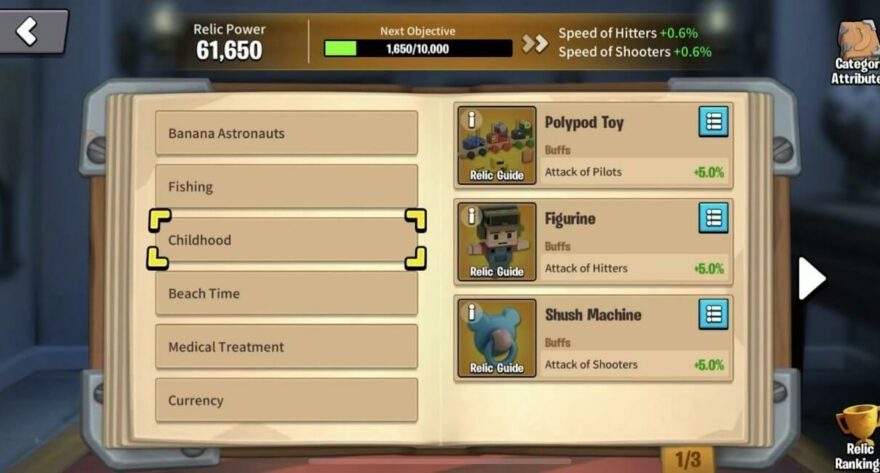 Meta Apes NFT game has launched a new feature called Relics that will provide new abilities and enhance the strength of the Apes. The relics are mintable and players can mint them as NFTs. Relics help players with Buffs, which means that it improves the Apes’ performance for a short period. However, the players can only unlock Relics once they complete Chapter 18.

Once a player collects a Relic, they activate the associated Buff. The Display Buffs is a special type of Buff that is activated when the player acquires specific relics. Players can display up to nine relics on the exhibition stand. Some examples of Relics are Instruction Tool, House/Car, Magic Box, Medical Notes, Zombie Stick, etc. The Relics can be upgraded by increasing the stars. Upgrading relics increases buffs and unlocks more display buffs.

The Relics can be traded/minted by a player on the Meta Apes marketplace. After connecting the in-game wallet, players can view the minted Relics on the Collections page of Meta Apes Marketplace. Each Relic requires a minting fee of 50 PEEL.

$PEEL is the official governance and native gas token of Meta Apes. PEEL holders can stake their PEEL and invest in critical in-game activities such as upgrading NFT fighters. In the game, top-performing players receive PEEL tokens as rewards. Players use PEEL for NFT purchases/trading, voting, purchasing SHELL packages, and gas fees. The maximum supply of PEEL tokens is 1 billion. Players on Ape Chain and BNB Chain can deposit the PEEL tokens. Once deposited, the tokens can no longer be withdrawn.

What is Meta Apes Game?

Meta Apes is a free play-and-earn MMO blockchain game on Android and iOS. The game is set in the post-apocalyptic world where humanity has ended, and Apes rule the world. In the game, players have to work closely with their gangs to become the strongest clan and fight to survive.

Players can join one of the six Clans and team up for more efficient quests. Meta Apes holds a special place as the first game launched on the BNB Applications Sidechain (BAS). The official in-game token of Meta Apes is $SHELL which players can generate by purchasing NFT fighters. Players can also choose to play the free mode without investing in NFTs.

There are many contests and events taking place in MetaApes currently. A Christmas and New Year Fest is active, where players can earn $1000 worth of PEEL and NFTs. In addition, the “Design your City” contest, open until December 31st 2022, will award four creative builders with a shareable $100 prize pool.

To celebrate the integration of PEEL deposits on BNB Chain into the Meta Apes game, Meta Apes is giving away amazing in-game items under the “Deposit Peel on BNB Chain” event. To participate in these events and contests, players must follow the instructions on the official Twitter handle of MetaApes.

Did you miss our previous article…
https://nft.magnewsblog.com/undead-blocks-launches-multiplayer/