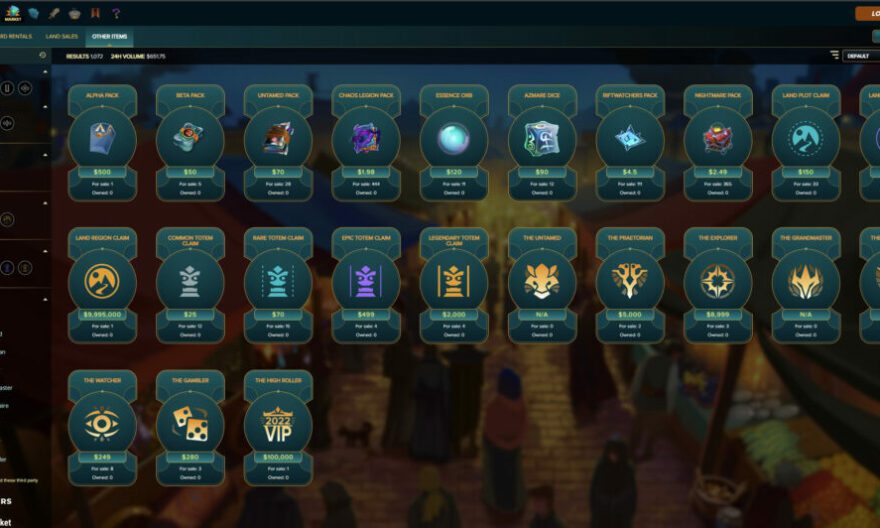 Splinterlands brings a new, important update to their in-game market, allowing players to trade game items that are not cards. Also, to try and move some packs, Splinterlands is holding a special sale for guilds (or players with very deep pockets), to purchase packs in large, bulk quantities and receive bonus rewards.

Splinterlands has been working hard over the past year to update their back end code to allow for quicker, smoother development. One of the planned items put on hold for these updates was the non-card market. Splinterlands includes a number of items for their game besides just the playing cards. This includes titles, land plot claims, packs, totems, and more. Now most of these items are easily accessible via the new, updated, in-game market!

Purchases can be made in the game market with CREDITS or DEC, though the seller is always paid in DEC tokens. There is a 5% market fee on all purchases. For techinical reasons, License tokens and card skins were not included in the current market, though they will likely be added in the future.

And this actually gives the in-game market a temporary, exclusive product, as the third party sites have not yet updated to offer these items.

Apparently, the team is not content with the current pace of pack selling. So Splinterlands is offering a limited time, bulk, pack sale option. These aren’t aimed at the general player. Rather, this sale is geared to draw in large guilds who maybe want to set up a scholarship system or distribute packs to their members.

The bulk deals for Chaos Legion come in four tiers, ranging in price from $10k to $100k. All of the tiers receive 40% in bonus packs, copies of a new, unrevealed Promo card, enough potions to cover opening all of the packs, and a 20% discount on ZenLedger tax software. When you get into the higher tiers some more interesting bonuses show up. These include free RUNI cards, a level 10 Guild Hall, and special sessions from NFTy Arcade to help educate players on the game and deck building strategies! The Gold and Diamond tiers also include a guild branded tournament.

The bulk pack deals for the tower defense game have a similar set of bonuses — extra packs, promo cards, free potions. But, their special, additional bonus includes custom copies of spell cards with the guild or organization’s logo.

The custom branded Spell cards are somewhat limited in quantity, making them a potentially valuable, personalized item for guilds. You can order Tower Defense bulk packages using this form.

Also, everyone who buys a Chaos Legion of tower defense pack between November 29 and Dec 21 at 5pm eastern receives a new, special, unidentified promo card. Each pack rewards one promo card. So with potentially thousands or hundreds of thousands of these promo cards around, it will likely be a Common card. However, don’t forget that using Promo cards in battles provides a bonus to victory points earned!

The images in the article show the breakdowns and you can also read more in the official blog post.

What is Splinterlands Tower Defense?

The Splinterlands Tower Defense Game (or SPLTD) is an upcoming auto-battler, tower defense game that will be part of the Splinterlands ecosystem. Featuring its own set of NFTs in the form of Towers, Spells, and Heroes, SPLTD will also utilize Dark Energy Crystals (DEC), SPS tokens, VOUCHERS, and even existing Splinterlands NFTs.

SPLTD will feature account bound progression. Certain items needed to reach higher levels of the game become bound to the player account and untradeable. This keeps players from just buying their way to the highest reward ranks. They still have to play the game and accumulate the needed resources to level up in-game.

The team expects to have 25 different towers available for the initial relases. SLPTD also includes Spell NFTs. Attach Spell NFTs to towers to provide additional bonuses and effects. In addition, Heroes make an appearance in the game — semi-mobile units that fight until they run out of hit points.

To combat 24/7 farming, the cards themselves earn less the more they are used. Players may choose to spend DEC tokens to recharge the energy reserves on cards. SPLTD will also feature card merging for upgrades, in a similar style to Splinterlands.

In addition, the Splinterlands Tower Defense Game will support the use of cards from the main Splinterlands game. Stake Splinterlands NFTs into Towers to give them bonuses. While cards are staked in SPLTD, they cannot be used for anything else. They can’t be played in Splinterlands, rented, traded, or loaned. Unstaking cards will take some time, though players will have the option of spending DEC and/or VOUCHERS to shorten the unstaking period.

Future plans include potential PvP and co-op PvE. Beta should arrive by the end of the year (2022) or in early 2023.

Did you miss our previous article…
https://nft.magnewsblog.com/masa-finance-brings-soulbound-tokens-to-ethereum-heres-what-to-know/