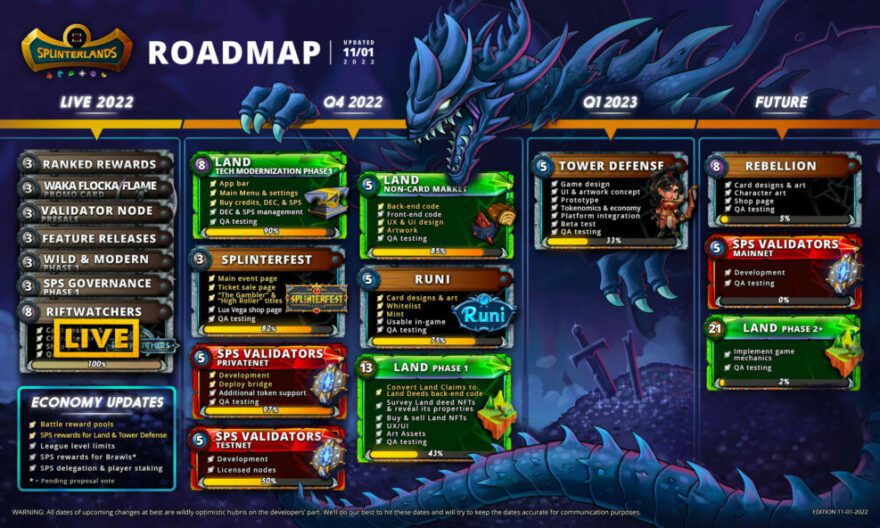 On November 17th, 2022, Splinterlands reportedly laid off nearly 45% of its employees owing to the ongoing deterioration of the crypto market and worldwide recession. It is not the first time such a giant firm significantly reduced staff this year. Even tech giants, like Amazon, Twitter and Meta had to terminate some of their staff to reduce costs. And with the current state of the crypto industry, it is not a surprise that some web3 gaming projects have to do the same.

Nevertheless, Splinterlands made it clear that they did not have any money in FTX or any other at-risk exchanges or services, nor did they have any debt or employ leverage in any manner. With so, the company’s loads of cash and cryptocurrency money are essentially those funds that will be utilized for their financial stability and growth.

In fact, the company highlights the terrible consequences of the declining markets and intimidating trends in the cryptocurrency market, which led them to recognize the major bubble in the market sooner. In response, they reduced about 45% of their team members to be on the safe side of the downturn and put a lot of emphasis on carrying out the roadmap.

Speaking of Splinterlands’ future goals, the company is entirely devoted to its heartfelt community, and they will put 100% capability to execute well for them even with a smaller workforce. They also stated that no new games or presales would be available for the foreseeable future.

Here’s an updated roadmap of Splinterlands for 2023, which contains the following items:

Additionally, the firm states that they are in a solid position thanks to the new period, corporate restructuring, and planned capital raise since they can focus on their goals instead of worrying about running out of runway. With these improvements, they will tenaciously keep creating their top-notch products and facilitating the best value for their well-deserved community.

Splinterlands is the premier & industry-leading blockchain-based trading card game. Founded in 2018 by Matt Rosen and Jesse Reich, Splinterlands, is driving the next wave of Web3 games. Mainly composed of gaming experts and operated by web3 gurus from investment platform Polygon, Mask Network, and New Tribe Capital, Splinterland focuses on building a superior experience for gamers in the metaverse.

Through its NFT trading platform, players may buy, sell, collect, and trade NFT cards to indulge in multiplayer skill battles and build specialized decks for real money prizes. With more than 2.4 million registered players, the global marketplace for this game comprises more than 500 listed virtual products for acquisition, commencing with OpenSea, Peakmonsters, and Monster Market for acquiring decks of cards outside, ending with NFTs.

In the meantime, with the release of the “Chaos Legion” sales pack in December 2021, the company has obtained a prospective growth and unreal user base, exceeding 400k active users and the ability to manage up to 4 million transactions per day. Even the CEO, Jesse Reich, expressed satisfaction with the team’s success in selling Chaos Legion, and the co-founder indicated the Splinterlands team was looking ahead to greater expansion.

The post Splinterlands Lays Off 45% Staff appeared first on Play to Earn.