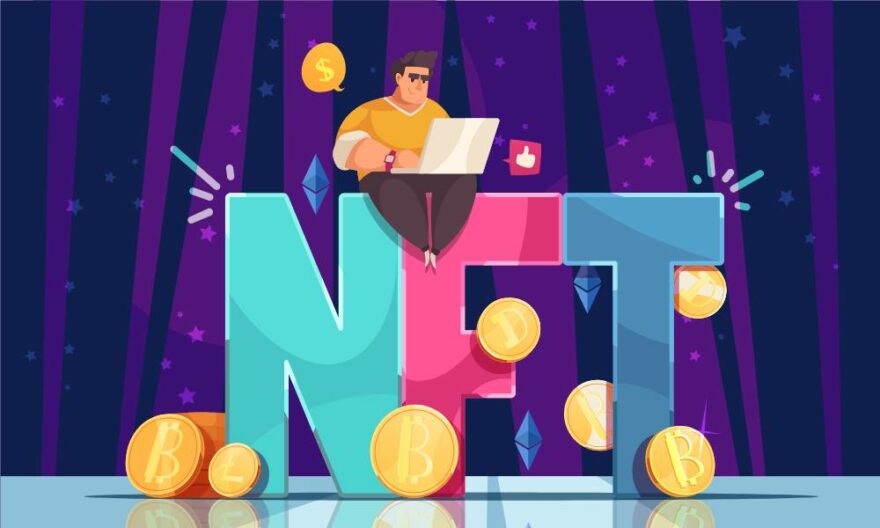 2021 was an unprecedented year for NFTs, with global sales hitting about $25 billion. From cartoon PFPs to music NFTs, fine art, and more, single NFTs were raking in hundreds of thousands of dollars—some even millions. From top brands to celebrities and even some governments, everyone wanted a bite of the NFT frenzy. But towards the end of 2021, the early signs of a slowdown became visible. As the new year progressed, the crypto winter set in, and things took a turn for the worse. In the aftermath of the FTX chaos, some recent reports suggest that NFT sales have hit a 16-month low. This begs the question: has the NFT bubble finally burst? More importantly, what is causing the NFT crash?

But first—what exactly is an NFT bubble?

What Is An NFT Bubble?

In the investment world, a “bubble” refers to an economic situation where the price of an asset increases rapidly. These sky-high values are typically driven by high demands from new investors and are speculative in nature. Naturally, as the demand slows down, so does the price of these assets. This steep fall in prices is what is called a “bubble burst” or a “crash”. The same is true for the NFT industry.

CryptoPunks, which were available for free in 2017, started selling for millions of dollars last year. When Beeple sold his ‘Everydays: The first 5,000 days’ for $69 million, all media attention fell on NFTs. The subsequent success of the Bored Ape Yacht Club saw a flurry of NFT projects dropping on the scene.

But here’s the thing—when investments are fuelled by hype, people often end up investing in assets that have no intrinsic value. More often than not, it is fuelled by the fear of missing out. So much so that even images of rocks and selfies of a computer science student (Ghozali Everyday) started fetching thousands of dollars. These were classic signs of a bubble, which was certain to burst at some time.

Is The NFT Bubble Bursting?

Generally, there are three tell-tale signs of an economic bubble bursting: prices plummeting, big selloffs, and minimal media coverage. For NFTs, the first sign is well underway. From around 225,000 in September 2021, NFT sales fell 92% to 19,000 in May. The numbers have only been going downhill, with Q3 2022 seeing $3.4 billion in sales, compared to $8.4 billion in Q2. Meanwhile, the November NFT sales volumes dropped to its lowest since July 2021. According to Bloomberg, among the top NFT marketplaces, only Magic Eden reported growth in sales last month.

Media coverage and investor interest are also waning, as is evident from Google trends data (pictured below). This year, while NFT searches peaked at the end of January, it has since witnessed a sharp decline.

Some NFTs that sold for millions are not even worth a fraction of their prices today. For example, last year, crypto entrepreneur Sina Estavi bought the NFT of Twitter founder Jack Dorsey’s first tweet for a staggering $2.9 million. However, when Estavi put it up for sale in April this year, the bids barely made it to $280. This is a typical example of an NFT bubble burst.

Simultaneously, some of the top NT collections are also seeing a significant drop in their floor prices.

Top NFT collections are now trading at around 1-3 ETH

Once the stuff of celebrity dreams and much hype, BAYC’s Otherdeed today has a floor of a mere 1.3 ETH. When Bored Ape’s Yuga Labs introduced the Otherside metaverse project early this year, its virtual land cost 305 APE (about $7,000 at the time). At current market prices, the floor is barely $1,500.

Moonbirds Oddities tell a similar tale at a 1.3 ETH floor price. Meanwhile, Cool Cats, one of the industry’s favourite blue chip collections, is now trading at 2.89 ETH. To put things into perspective, at its peak last year, a single Cool Cat NFT cost an average of $92,000. World of Women, which has been at the forefront of Web3 women empowerment, has also been met with a similar fate. From a peak of around $40,000 in March 2022, its floor has dropped to around $2,300 today (1.95 ETH).

All things considered, it is likely that the NFT bubble has burst or is well on its way there. To be sure, none of this is surprising. The NFT industry is in its infancy. For any emerging technology, a tumultuous initial period is a given.

Why Are NFTs Crashing?

So, what is causing the NFT bubble to burst?

The current crypto winter is widely considered one of the biggest contributors to the NFT bubble bursting. According to CoinMarket cap, the global cryptocurrency market shrunk from $1.02 trillion to $983.72 billion early this year. This was spurred by increasing interest rates, a looming recession, and the Luna-Terra crash, among other factors. Consequently, the prices of almost all crypto crashed, including that of Ethereum, which accounts for the majority of NFT trades.

Then came the FTX collapse, which made matters worse. FTX, once one of the top cryptocurrency exchanges, filed for bankruptcy in early November, adding another blow to the crumbling crypto market. In turn, prices of several NFT projects also fell, including that of many blockchain games, Bored Apes, and Solana NFTs.

This has also led to investors being cautious about their investment choices. As Binance CEO Changpeng Zhao said, “That’s going to really shake confidence in trust credibility in this industry. So now, people are withdrawing funds from centralized exchanges, and the volume will decrease.”

Apart from these, regulatory uncertainties, rising NFT scams, and a disproportionate number of buyers and sellers have also contributed to the NFT crash. The lack of utility of many NFT projects has also come under increasing scrutiny. While some of these are short-term trends that will change with market corrections, others need bigger shake-ups in the industry.

Is The NFT Market Dead?

The NFT bubble bursting is not necessarily bad for the NFT space. In fact, this could be great news for artists and creators. For one, the focus is now shifting from hype to utility; from mere jpegs to real-life values. The projects that survive this bear market will be the ones that offer more to community members and be worthy of investments.

“The bigger story here is not so much that NFTs are down but that the market for them is changing,” crypto venture firm, SuperLayer’s Mahesh Vellanki told Quartz. “We’re seeing more competition and in turn more creative projects getting built on a wider variety of chains.”

In other words, people are (finally) looking at the big picture—NFTs are, and have always been, about more than just cartoon PFPs. Going forward, this means a focus on more interesting use cases such as NFT ticketing, merch, charity fundraising, and other real-life utilities. In addition, this will also likely result in users investing in artists and creators that they truly believe in; rather than FOMO-fuelled investments in just about any outlandish “asset”.

“It’s like the smoke is clearing, and we’re getting a chance to see what it is about this technology that continues to be valuable to collectors and creators alike,” photographer Brittany Pierre told The Telegraph. “Proven builders and projects are getting focused on now. We’re all down, so we’re all helping each other. The community is closer than ever.”

In conclusion, the NFT bubble may have burst; but NFTs are far from dead. But who and which projects survive remains to be seen. For now, there’s no telling how long the bear market will last. For projects that are struggling, this may be your cue to incorporate some significant changes and follow the market sentiments to turn the tides in your favour.

The post The NFT Bubble Has Finally Burst, or Has It? appeared first on NFT Evening.

Did you miss our previous article…
https://nft.magnewsblog.com/forbes-and-the-sandbox-create-a-festive-metaverse-quest-with-prizes/