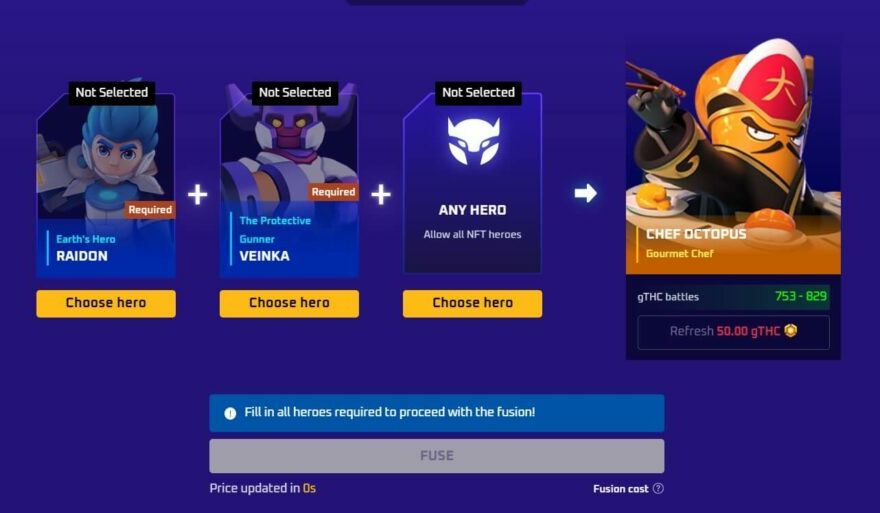 In the Fusion event, players can acquire upgraded characters and earn gTHG rewards by climbing the leaderboard. Heroes can be fused to create new heroes of Epic and Legendary rarities. Players can use 3 NFT Heroes for fusing, of which one NFT must be from the inventory and the other two from the requirement pool.

The output Hero will depend on several factors, such as input Hero levels, rarity, and gTHC battle points. Players can restart the entire fusion process if unsatisfied with the outcome. The Fusion event can be accessed by visiting the Marketplace. Players can earn extra gTHG rewards by completing fusion milestones listed on the marketplace. The more fusions players make, the higher the rank on the leaderboard will be.

One year of Thetan Arena

Thetan Arena originated from a Vietnamese developer, WolfFun, who relaunched the traditional MOBA game Heroes Strike with this new name. It launched as a play-to-earn version with the existing features of Heroes Strike. Having fully finished gameplay standards and a source of blockchain revenue, Thetan Arena emerged as a promising blockchain game.

In the initial days, the game raised money from early backers through an IDO, which brought in $200 to develop the game. Within months, Thetan Arena generated more revenue and downloads in two months than Heroes Strike did in a lifetime.

The Thetan Arena game was launched in November last year, after which it gained over 3 million users in the first week. After the launch, the developers added many features to the game, such as guild quests, a rental system, co-op modes, hero staking, and much more. As a result, the game became the biggest MOBA on blockchain and one of the biggest play-to-earn games.

Since the game’s launch in November 2021, the game has achieved several milestones. According to a report published by BSC, Thetan Arena had an estimated 900,000 holders of game NFTs during January 2022. Thetan Arena runs on both Android and iOS and recently became the number one app on the App Store in 11 different countries. Currently, the game has a player base of 25M.

What is Thetan Arena Game?

Thetan Arena is a free play-to-earn mobile game on the BNB Chain. The game has been developed by the gaming studio Wolffun Game, who released the Heroes Strike game. In the game, players own game characters, weapons, items and can participate in Deathmatch, Battle Royale, Tower Destroy, and many other game modes.

Players can also trade heroes and play free multiplayer matches. Rewards can be won in the game if a team wins or a player is the last man standing in a Deathmatch. It is also the only game in which NFT characters have a limited usability lifecycle; the NFT items can be used to earn in-game currency only in a limited number of matches.

The post Thetan Arena Fusion Event is Back for the Game’s First Anniversary appeared first on Play to Earn.