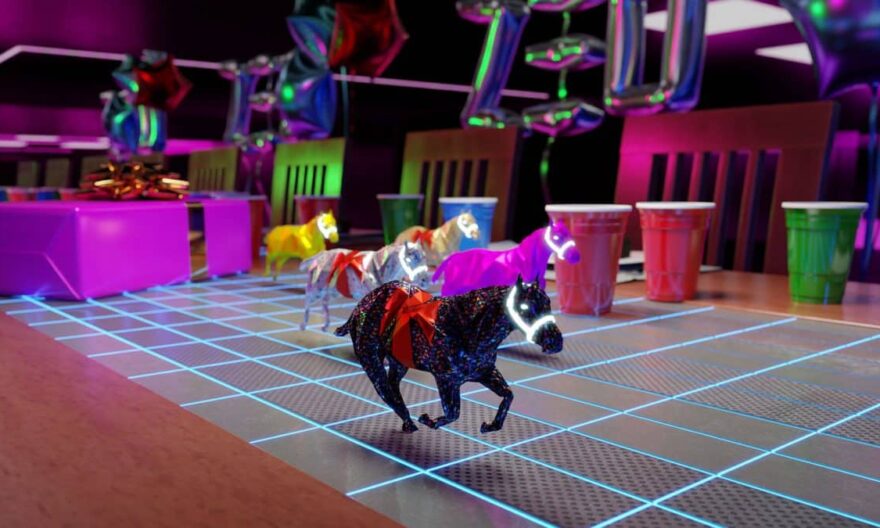 To celebrate its fourth birthday today, Web3 digital horse racing game, Zed Run is giving away a free skin. To win the birthday-themed skin, all participants have to do is race four times during the birthday racing event. In fact, Twitter users also voted for their favourite birthday skin! Therefore, all eligible participants will be able to claim ‘Dark Glitter’, the skin which won the most votes.

Here’s all you need to know about Zed Run’s birthday challenge:

Launched in late 2018, Zed Run has become one of the leading NFT games, boasting thousands of stable owners racing in more than three million races. Based on the Ethereum blockchain, Zed Run is a digital horseracing game which allows players to buy and race digital horses to earn money. So far, its players have also raked in $50 million in prizes, Zed Run claims. Moreover, despite a tough 2022, Zed Run was able to release innovative gameplay updates. Today, January 19, marks the game’s fourth birthday.

“As we look back on the past four years, we are proud of what we’ve accomplished and excited to continue building on our success,” said Chris Laurent, CEO and Co-Founder of Virtually Human Studio, Zed Run’s parent company. “ZED RUN’s unique blend of skill, strategy, and digital ownership has set it apart as a pioneer in the industry and garnered the attention of many iconic brands, such as Budweiser, NASCAR, Netflix, Atari, Stella Artois and The Victorian Racing Club.”

“But none of this would be possible without our community,” Chris added. “We are very fortunate to have such a passionate, dedicated and knowledgeable group of people to build alongside. Their continued support and feedback are invaluable, which is why we’re inviting everyone to celebrate with us by racing four times to earn a beautiful birthday-themed skin – for free!”

What is the Birthday Racing Event?

First, to receive a Zed Run birthday skin for free, players have to meet certain eligibility criteria. These are as follows:

What’s more, Zed Run has made its birthday racing event accessible to everyone. In other words, you don’t need to own a racehorse to take part. Instead, you can simply borrow one from the Lending Marketplace.

Zed Run will add the wallet addresses of all eligible stable owners to an allowlist. This way, all allowlist members will be able to mint the Zed Run birthday skin for free. Additionally, the mint period will be open for only 48 hours, starting at 12 am UTC on January 23. You can learn more about the game and the Zed Run birthday race terms and conditions on the game’s website.

The post Zed Run Celebrates its 4th Birthday With Challenge to Win a Free Skin appeared first on NFT Evening.